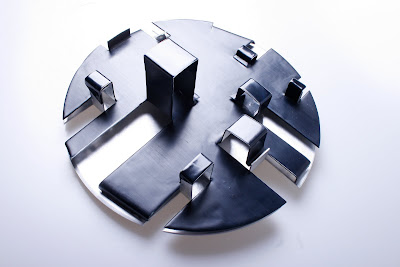 This work, a wall sculpture, was made for a group show called 360 Degrees Johannesburg, that opened on December 3, 2011; at the Artspace gallery situated in Jan Smuts Street Johannesburg. The work is one of two pieces - the second titled 'looming 2' is a animated video work produced in collaboration with Mocke J Van Veuren. Both pieces are still on display at the gallery until 13 to 28 January 2012.


“From the top of Africa’s tallest building, the 50 floor Carlton centre in Johannesburg, the panoramic view is disquieting....Hidden by the variegated surface level mosaic of Johannesburg land use patterns, extremely deep rooted political and economic dynamics have spawned classic competitive struggles over urban space.”
(Smith, 2003)


David M. Smith, in his book on urbanization and social change in South Africa, discusses the ongoing classed and raced struggles for space in the inner city. ‘Looming’ is an aptly titled abstract sculpture that depicts an aerial view of the east end of Johannesburg’s inner city. The Carlton is a key focal point of the piece; forged from the eastern edge of a circular disk and representative of its exaggerated scale (in comparison to its surroundings). The use of an aluminium skeleton and a skin-like wax covering furthers its links to the relational notion of architecture as macrocosmic reflections of the human body.
Furthermore, the work is an investigation and visual illustration of the transformative process of manufacturing in terms of inscription of a personal history on a form. Each successive action that occurs in the manufacture process yields incremental changes on an internal and external level. Consequently, it acts as a gradational visual record; a timeline mapping a progression of moments within the object’s lifecycle.
Posted by Farieda Nazier: Sculpture & Metalwork at 4:08 AM