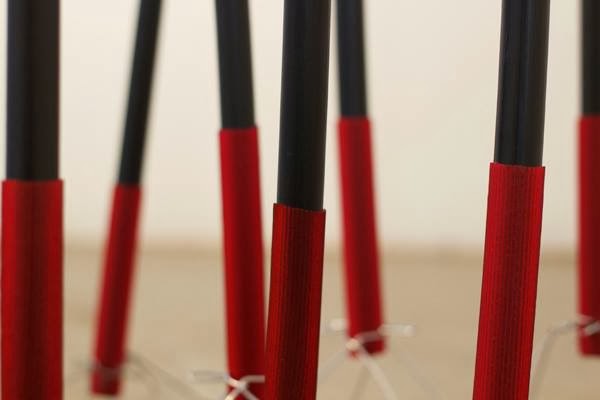 The exhibition is a platform for the art works of a demographically diverse group of artists; Farieda Nazier, Gordon Froud, Avitha Sooful and Oupa V.Mokwena. Their comprehensive body of work considers the paradoxical readings of contentious socio-political themes as it unfolds within the vexed context of lived experiences over the last 20 years.

Nazier’s work 'Nag vannie lang latte', is a satirical take on the ironies and tensions that exist within the uhuru-mythology Nag van die lang messe. 'Bite the Bullet' by Sooful, is a ceramic installation of 19 larger-than-life spent bullet cartridges and 5 new bullets, which reflects the contested and violent legacies of the country.
Froud’s untitled art work, critiques the notions of tension and torsion in the controversial works of contemporary South African artists. Mokwena in his work entitled 'Our Gnomes', deconstructs the African Tokolosh mythology by positioning it within the domain of South African politics.

The intervention further engages in topical dialogue that resonates with the idea of Paulo Freire and Steve Bantu Biko’s praxis through a public educational programme. The themes for the public programme address criticality amongst South African youth that will be addressed in the Angry Youth Workshop supported by UJ CERT; running on 11 and 12 April 2014.

The project as a whole aims to raise important questions about the nation’s post-apartheid trajectory; in order to evoke critical dialogue in audiences around the discrimination-wounding-consequence theme. A broader objective of the project’s praxis element is to instill critical consciousness in marginalized and disenfranchised social groupings, contributing towards physical and mental liberation or decolonization.