...and at the theoretical foundations of the After Math© project.... Frantz Fanon...

At the core of After Math©, reside the theories and concepts of psychiatrist, philosopher and revolutionary Frantz Fanon (July 20, 1925- December 6, 1961). Fanon (1952) in his book titled Black skin White masks unpacks the devastating psychological consequences of colonialism and broader, racially oppressive political regimes. He coins a key concept referred to as the “colonisation of the mind” and identifies a resulting neuroses i.e. “black neuroses”.  “Colonisation of the mind” is the process whereby the colonised, due to broader political racial inequalities, is violently dispossessed of physical, material and cultural effects (Hook, 2004b: 88). The empowered coloniser and the disempowered colonised settles into what Fanon refers to as a “psycho-existential complex”. For the colonised the elimination and degradation of all forms of wealth, manifests psychologically as distaste, subordination and inferiority. 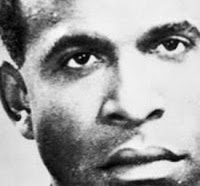 As such, Fanon (1952) argues that the “black neuroses” is caused by an elimination of black/native culture and its replacement by the favoured Eurocentric culture as the only standard or model to aspire to. In other words, the self loathing aspect of the oppressed identity is forged by the coloniser. Fanon’s “black neuroses” refers to the black man’s[1] aspirations to be accepted by the coloniser; or even to become the coloniser.  Hook (2004a) extends this condition to the South African context in the following quote: “apartheid may be considered a particular extension or variation of the basic politics and conditions of colonialism”.

He refers to Bertoldi (1998) who claims that the basic constructs of colonialism i.e. politics and conditions, apply to apartheid. In a similar way, the South African “black neuroses” becomes a variant of the original Fanonian condition.

As previously introduced, the After Math© project is a sculpture, video work and performance based social intervention that explores temporality, wounding and consequence. The project aims to contribute to post-colonial and post-apartheid discourse by visually unravelling, unpacking and tackling the process of wounding, inscription on the physical and mental body; as well as its aftermath. It proposes to explore the after affects of racial discrimination within a South African context through the process of narrative re-enactments which manifests here as sculptural installations, video work and performance art. The project through its major outputs aims to critically engage the viewer around the subject of temporality, wounding and its consequences.
[1] Subsequent psychoanalysts, such as Loomba (2005), notes that Fanon’s writing is gendered. She insists that post-colonial critique is inclusive of both genders and all classes and sexes.
The image of Fanon was taken from: http://repeatingislands.files.wordpress.com/2011/10/frantz_fanon_memoire_d_asile_0.jpg?w=500
Posted by Farieda Nazier: Sculpture & Metalwork at 7:18 AM