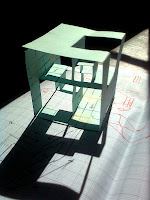 Below, find the concept and artist statement for my show titled After Math©, which will be hosted by the Apartheid Museum, Johannesburg in August 2012.

After Math is envisaged as a long term project, that comprises a range of outputs. The initiation phase of this project commenced in February 2012 and involves the production of the first body of work. Phase two involves introducing and displaying the work in the public sphere; beginning with an exhibition at the Apartheid Museum, Johannesburg in the second week of August 2012.
Through collaboration, the work benefits from a broad range of artistic disciplines and creative dialogues. Approximately eight works will manifest as sculpture installations (created by Farieda Nazier), two to three as video work (by Mocke J Van Veuren) and one as a performance piece (by Thami Hector Manekehla).

The intent behind this social art intervention is to invoke and evoke the process of catharsis by probing wounds of the past. Within the South African context as with many other analogous contexts, personal histories are undeniably engrained with discrimination and its consequent wounding. Borrowing from Fanon, Hook (2004a) refers to this wounding as the “neuroses of blackness”. He argues that instances of racism cannot be reduced to any one theory; and infers (by making reference to the Apartheid Archives Project)[1] that these narratives be approached via multiple conceptual lenses (Hook 2004b). In this regard, this intervention uses a range of explorative creative methodologies including stop motion animation, sculptural installations and performance art as mechanisms to generate dialogue around the discrimination-wounding-aftermath theme. Although foundational works manifests as sculptural installations, the process for arriving at the sculptural combines a personal socio-political account structured by mathematical processes and formulae. This methodology was selected to unpack causalities and its effects on the ethereal, through rational calculation and deliberation.
Consequently, the project comprises of two main streams; the first pertains to the creation of an art experience in line with the foundational underpinnings of Fanonian psychopolitics and secondly, capturing the viewers interaction, reaction, response and reception of the work in an analytical article.

The work
The intervention described below is informed by two key works of Frantz Fanon    i.e.   The Wretched of the Earth (1963) and Black skin White masks (1952). Through sculptural installations, video work and performance the work makes reference and attempts to visually unpack key concepts from these foundational works, within a contemporary post apartheid South African context.
Sculptural Installations and Video work
The installations and video work which constitute After Math, illustrate the transformative processes incurred in terms of inscription of a personal history on a body or form. It is further, a gradational visual record demonstrating a progression of moments within a work’s lifecycle.  As time elapses, cause seemingly disappears and the wounded object replaces it; becoming the only evidence that the action ever occurred. Each installation and video work will comprise a number of unfinished abstract sculptures deliberately stopped at different stages of its production. These will act as physical records or evidence; a metaphor for the inscribed and wounded body.  Similarly the stop motion animated video work constitutes a number of still photographs depicting the bodies as they progress[1]. The relation between the work and its surrounding context i.e. space-light-sound environment is core to the manner in which they will be read, perceived and experienced.
The performance
By means of play, movement and illusion, the art experience extends in meaning through performance; transgressing boundaries that exist between the three modalities: static installations, animated video work and living body. Within the exhibition space, the performing body explores and depicts the volatile actions of discrimination-wounding-aftermath sequences.

Field, S. 2007. The Politics of Disappointment: Trauma, ‘Healing’ and Regeneration in Post-apartheid South Africa. [O].
Available:    http://www.riehr.com.ar/archivos/Investigacion/PoliticsofDisappointment.pdf
Accessed: 9 January 2012
Hook, D. 2004a. Fanon and the Psychoanalysis of Racism. [O].
Available: http://eprints.lse.ac.uk/2567
Accessed: 20 February 2012
Hook, D. 2004b. Frantz Fanon, Steve Biko, ‘Psychopolitics’ and Critical Psychology. [O].  Available: http://eprints.lse.ac.uk/961
Accessed: 20 February 2012
[1] The Apartheid Archive Project (AAP) is an international research initiative run by the University of Witwatersrand. It aims to archive and analyse a broad range of up to 5000 narrative accounts of racism in South Africa. AAP has launched three successful international conferences that critically interrogate the data they have collected, using number of theoretical lenses.
Posted by Farieda Nazier: Sculpture & Metalwork at 7:32 AM